Skip to content
Yesterday a wonderful Jupiter talisman was sent to me from the American magician Rufus Opus who makes them for people here .  Rufus, along with JakeStratton Kentare one of the few people I know who actually make magical material according to the rules. 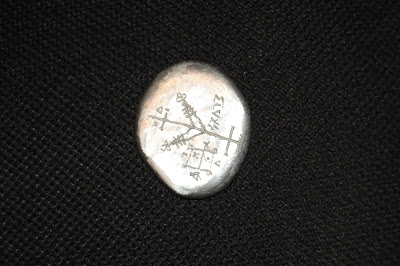 My talisman was made at the hour of Jupiter when it was particularly comfy in Cancer.  It was blessed by Rufus in the expectation that it would be initiated by me when it arrives  (that is a reference to the Z2 documents).  You just have to hold it to know that this is a serious talisman which positively oozes Jupiter energy.   However, the owner’s manual that Rufus provided with the talisman got me thinking.

Those who have read my book Making Talismans, which is about to get a new incarnation, will know that I see talismans as living beings — thought forms to which the physical object is like a physical anchor on the this plane. But Rufus has taken this stage further and suggested that you spend time with your talisman spirit and make it offerings.  This tallies with some other work I have been doing with underworld spirits and this idea of offerings and interacting with them while they do the work for you.
In that situation, you ask a spirit to appear and do you a favour and you pay them afterwards, usually with an offering. Alternatively, you make a thought form which is ensouled and you can contact while it does the job. Offerings and communication are all part of the relationship that you are supposed to have with these spirits.  Soon after we formed the Magical Order of the Aurora Aurea, I experimented with making a black handled dagger to assist me creating magical circles and for general defence.  It occurred to me before hand that it would also be a living creature and I should treat it as such.  So I visited the Elemental Kingdom appropriate to me and asked the Elemental King for a volunteer to work with me in this role.  One came forward and I gave it a name and it agreed to show up for the Z2 consecration, which I did on another occasion. Whenever I use the knife I invoke the elemental to help.  His name is on the knife  along with his element. What is strange though is that I have developed an attachment to the knife/spirit and he sometimes shows up if I am holding the knife or not. Crossing magical circles made with this knife is a tricky business even for physical beings. It takes some days for us to get pizza delivery people to the flat because they keep getting lost in the building.   I don’t yet make offerings to him, but I would have thought it was a good idea.
But the concept of using it for talismans  flies in the face of modern magic in which you are supposed to do the ritual and promptly forget you ever did it. The reason you were supposed to forget about it is was because you would “jinx” the ritual with negative thoughts.  Then it occurred to me that working with something you invoked makes a lot more sense than fire of jinxing your ritual.  For example the spirit can tell you why something is not working, or what you need to do to help something happen. It has always bugged me about rituals or talismans is that you never really knew if it had not worked, or it was time to give up.
For example, if you made a love talisman to assist you get a date you would want to interact with the spirit who might warn you not to use your favourite pick-up lines if you wanted a girlfriend (or leave an establishment with your family assets unbruised).
Obviously interacting with a spirit of a ritual will not always be a good idea.  For example some rituals where you cut ties with those who caused you pain are best worked and then forgot about.  But it might be interesting for people to stop seeing those things they invoked as beings best forgotten.
Share on Facebook Share
Share on TwitterTweet
Share on Pinterest Share
Share on LinkedIn Share
Share on Digg Share