For the last few months, I have been having nagging doubts about the way I have been interpreting some geomancy symbols. It has been nice to use the traditional black and white methods with absolute meanings, but the issue was that some of my readings were subtly off.

Some of this is due to the assessment of elemental action in each of the symbols.  Populus has all its elemental attributions switched off so it is entirely passive and via has them all switched on and is so is entirely active.  What sparked off my train of thought was a chart which strongly perfected and had a comparatively positive court (which should have meant “yes”) could only be read as “no” because both the querent and quested were both populus.

Readers of my blog will note that I have tried to incorporate astrological meanings to the symbols before using the Agrippa attributions and while these went some way to fixing some of the issues I still felt that my readings were a bit “off.”

Cattan and Gerard’s astrological approach has been installed within the geomantic system, but it has not been extended to the meaning of the symbols themselves (nor their astrological attributions).  The pair give astrological meanings for each of the symbols which if applied to a modern chart give slightly different meanings which become crucial when making a judgement. 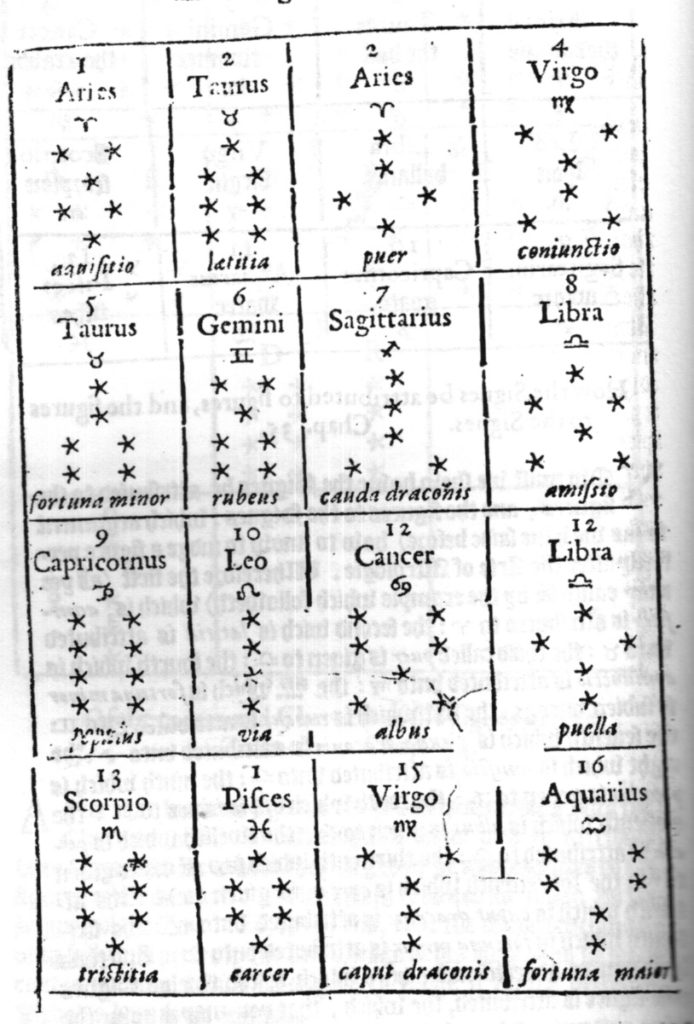 So what we can see is that while traditionally we have tended to see the geomancy symbols as good or bad aspects of the planets, they should be tuned to specific zodiacal patterns too which in some cases turn some of the extreme interpretations on their head.

Caitlan says that Populus is Moon in Capricorn while Via is Moon in Leo.

It is possible to see the meanings “community” and “way” in those astrological meanings and while moon and Capricorn can get a bit stuck it is mostly because it holds to existing rules or is trying to enforce them.

Cut and pasting a Moon in Capricorn transit information from Cafe Astrology you get this:

“We become aware of the need for structure and planning ahead. We also instinctively are aware of the limitations of time. We are motivated by a desire for success. Achievement and manifestation are most important to us now. We are resourceful and do not want to waste time, energy, or resources. This can be a very sober influence–even a depressing one. However, it can also be a productive time when we look reality in the eye.

It favours Sam Block’s image of the township following its rules and community. However, it does not suit being passive or lacking energy. Some of the rules might still apply. Populus as a judge might not be very useful because it will only follow past experience or be inflexible but the reading should not be rejected because the Judge is blind. Populus could be good or bad it just depends on the rule that society is following. Society might be racist and the rules bad. But not all societies are bad or are bad for every question.

So what about Moon in Leo Via. Cut and pasting again we get…

“The Moon in Leo speaks to our “inner child”. It is a warm, generous, whole-heartedly loving position. Pride keeps us from pettiness, but it can also prevent us from opening and revealing how we are truly feeling. We are on stage, our feelings are grand, and we appreciate some drama in our lives. We are easily threatened by anything that is impersonal. This is a time when we seek attention–when we want to stand out for our special qualities. It’s a strong time for romance and any creative activity as well.

The operative words appears to be “creative” and “activities” without the sense of order. The way is one of change and movement but with a sense of drama behind it. It might even be change for its own sake. As a judge it would insist that  “something has to damn well have to change” and it does not care what. The Way might be good or bad depending on where you are stomping off towards.

Carcer’s malefic Saturnian side is emphasised in most interpretations (even in Cattan). It is seen as being limited and locked up and only good if you want that sort of restriction. However, the astrological placement makes it Saturn in Pisces.  I have Saturn in Pisces and it is certainly not restrictive if anything it is “restrictive in its anti-restriction.” It declares that change is necessary and practical steps need to be made. Carcer in a reading would indicate issues of restriction appearing and needing to be faced but a fundamental desire and need to dissolve those barriers and move.  Saturn in Pisces is about taking dreams and making them real and practical. It could also imply that the world is in a state of flux and practical changes need to be made to bring about a new order.

It would be positive if a person asked Geomancy questions about marriage, for example, because it is a form of positive restriction and focus. The arab meanings of the word for Carcer is Shackle which while restrictive does imply movement.

With Pisces how you feel about the restriction is important and you have the power to dissolve it.

Lastly we will look at the more problematic geomancy  figure of Rubeus. This particular figure is associated with violence, anger and rows and appears to be only useful in matters of sex, war and energy.  However Cattan’s Mars in Gemini attribution makes it much less malefic.

In the mutable air sign of Gemini, Mars is a scattered and unfocused. Easily bored, it needs change of pace frequently. Rubeus then shows adaption and  thriving on change but often lacking sustained interest it could be a busy time. So what makes Rubeus a bad geomancy symbol in some questions is that it tends to snap and be sarcastic, gets bored and gives up.

When we look at these meanings alongside the Arabic meanings of the geomancy  figures we start to get a different sort of reading.