Skip to content
Below is an example of how you use the Z2 documents to construct a ritual. In this case it is a talisman to assist a person who is suffering from a Pluto square Pluto transit. Rather than invoking more Pluto it uses Mercury to communicate what the transit is trying to do so that they can co-operate with it. Pluto and Saturn transits can be bothersome because the person may want to change but it is not clear what they are supposed to do.
The Z2 documents provide a skeleton outline for a Golden Dawn Ritual so that they can be bolstered out and adapted. In modern terms they are a bit of a cut and paste.
The version of Z2 which I have used here is an original Golden Dawn one, rather than that printed by Regardie. They are in bold so you can see them and the result I wrote alongside it. The invocation to Mercury is Thomas Taylor’s translation of the Orphic Hymn to Mercury. The Talisman is a four world’s design which I describe in Making Talismans. The outer ring is King Scale of Mercury the next ring is queen scale etc. The only colour which is out of sequence is the central one which is the colour of Scorpio in Malkuth. This is because Mercury is acting on Pluto to have its effect.
Anyway this is designed to give people an idea about consecration of talismans using the GD method and how to construct rituals using the Z docs.  Have fun.
A- The place where the operation is done.
This ritual is a talisman of Mercury which is designed to aid the communication of the forces of Pluto during a tricky transit.
B – The Magical Operator.
The Magician is dressed in his 5=6 robes and cross and has the lotus wand, ceremonial sword and dagger.
C – The Forces of Nature employed or attracted.
The ritual calls the forces of Mercury namely
Elohim Tzaboath, the God Mercury with his seven names; Mercurus, Hermes, Khthinios, Thoth, Raphael, Angelus Macaron and Hermenteutes The Intelligence of Mercury Tiriel with the God Pluto
D – The active Telesma or material pentacle itself. 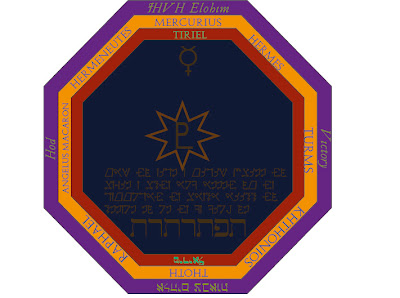 E – In Telesmata, the selection of the Matter to form the Telesma; the preparation and arrangement of the place. The drawing and forming of the body of the Telesma.
The temple is arranged as the 0=0. The room must be prepared by the Lesser Invoking Ritual of the Pentagram, and the Supreme Hexagram of Mercury. It should be done on the hour of Mercury on Wednesday The magical image used is of Mercury journeying to the Underworld and receiving a message from Pluto.
F – The Telesmata winding a black cord round the Telesman or material basis employed. Covering the same with a black veil, and initiating the blind force therein. Naming aloud the Nature of the Telesma or Operation.
The Talisman is placed in a black bag and tied three times with black Chord.
G – In Talismans the pentacle is now placed towards the West, and duly consecrated with Water and Fire. The purpose of the
operation, and the effect intended to be produced is then to be rehearsed in a loud and clear voice.
Stand in the East and look between the pillars. Have a clear visualisation of Mercury going into the Underworld to communicating with Pluto. Try to see this visualisation taking place between the pillars through-out the working.
State: “The purpose of this working, if it pleases the Divine is to create a talisman which will help aid the process of transformation of N by allowing the deeper aspects of her unconscious to be expressed so that (s)he may better understand what action she needs to take to assist the Pluto transit.”
Take the talisman to the West and draw the symbol of Salt over it.
Say: “Creature of talismans. Your purpose to be simple of paper. You are dead to that purpose now and will become the physical body for a Talisman of power.”
Consecrate and purify the talisman. Above the bag should be seen an egg of blackness with a white flashing light above it. You should attempt to see floor pillars.
H – In Telesmata Placing the Talisman at the foot of the Altar, state aloud the object to be attained, solemnly asserting that it will be attained, and the reason thereof.
The talisman is placed at the foot of the altar.
This talisman shall use the powers of the Eightfold Mercury to allow expression of the forces of Pluto to be articulated to the conscious mind of P. This will assist the process of transformation which this transit creates with less pain and physical discomfort.
I – In Telesmata announcement aloud that all is prepared and in readiness, either for charging the Telesma, or for the When the role of a good Telesma or is for good purpose it is to be placed within the White Triangle on the Altar and the magician places his left hand upon it and raises his right and invokes the charging force holding the sword or other implement erect.
Stand in the East of the altar place the talisman on the white triangle with your left hand on it. See the magical image of Mercury in the Underworld and draw it’s energy down into the talisman by holding the Gemini part of the wand.
J – In Telesmata the performance of an invocation to attract the desired spirit to the Telesma describing in the air above it the lineal figures and sigils, etc., with the appropriate instrument.
Then, taking up the Telesma in the left hand, let him smite it thrice with the flat of the Sword. Then raising his arms to their full stretch and holding in the left hand the Telesma and in the right the Sword erect let him stamping thrice upon the Earth with the right foot). The same is to be done with the material basis of for the meteorological phenomenon.
Invocation of Elohim Tsaboath

O LORD God, Holy Father, Almighty and Merciful One, Who hast created all things, Who knowest all things and can do all things, from Whom nothing is hidden, to Whom nothing is impossible. Oh thou who is the Splendor of the Universe. I ask you to use this talisman to enable N to transform (him) herself by the powers of Pluto by understanding the process which is taking place and being able to articulate the transformation required.