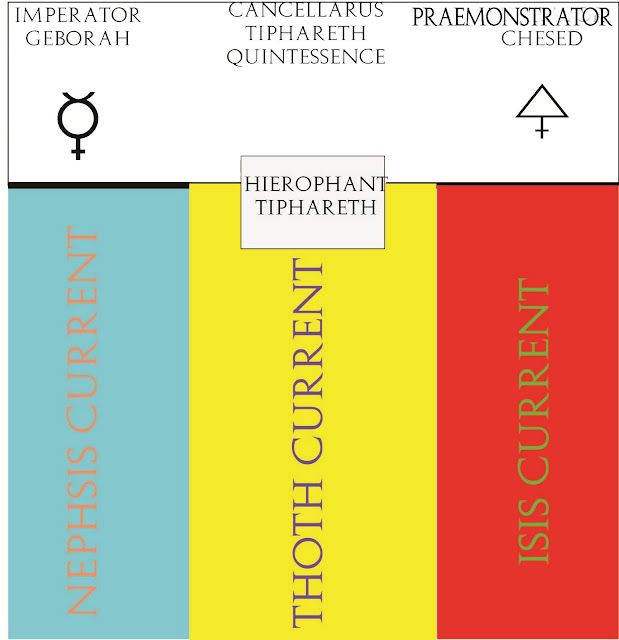 The top table of chiefs in the Golden Dawn ritual are composed of the Imperator, the Cancellarius and Praemonstrator. The Hierophant is also supposed to sit between them and behind him sits the Past-Heirophant.

Throughout the history of the Golden Dawn little work has been done about the magical function of these officers. Instead the titles are seen as mostly administrative. The person who fancies themselves in charge of the group takes the role of Imperator because it means “the person who rules” and it gets to stick them on a throne above all the others dressed in bright red and holding a jolly big sword.
However this ego stroke shows the ignorance of the system and the belief that it was an Imperator that ran the Order. In the original GD these officers were not seen and their function was not discussed by the great unwashed.

The Hierophant’s throne was between a half open curtain and that was all that could be seen of these officers. If there was any dance of the ego it was conducted behind closed doors or curtains.
There were three important officers on the top table and one, the Heirophant which moved between the three.

The three represented the three pillars on the tree of life, the alchemical principles, Fire, Air and Water and the gods Nepthys, Thoth and Isis. The Hierophant (and the candidate) represented Osiris, Salt and Malkuth, and Earth.

But what does all this mean?

There are three great currents which come into the 0=0 ceremony from the withdrawn orders which are personified by the three chiefs. For the sake of identification I will call these the Nephsys, Thoth and Isis current. Their function is to rebuild and empower Osiris.

Nephsys is water and Mercury.

Her function is to alchemically separate (ie disolve) the candidate during the various processes of the 0=0. She is the force of putrefaction which takes place after death. She is also the purifier. Isis is fire and sulfur and the consecrating force which alchemically binds the candidate. Thoth is the quintessence the force which unites the forces of Sulphur and Mercury and thus resurrects Osiris.

These three rays take up a third of the temple each. Every time a candidate or an officer (with their godform) enter into those temple sectors they are working with and interacting with those rays. Thus when the candidate enters the temple in the West the first thing that happens to them is that they are broken down by the Nepthys force so that they can be rebound by the Isis force and raised up under the Thoth ray. The work of the 0=0 therefore can be said to be using the “Solve et Coagula” maxim of the alchemist.

Also it is interesting to note that when Sulphur is mixed with Mercury and baked it creates a vermilion powder which was the basis for red paint. It makes sense of why the Hierophant wears red and how the action of the Imperator and the Praemonstrator bound by the power of the Cancellerious manufacture within the order the “created fire and the uncreated (or hidden) fire” which powers the Hierophant.

The Hierophant then takes his power from these three rays which are manifested throughout the grade rises of the outer order. He is the salt, or material result of their action and hopes to pass on these powers to the candidate.

To me this answers the question as to whether the Hierophant should sit in front of the officers or in a line with them. He should be on an apex of triangle which the base line is the Imperator, the Cancellarius and the Praemonstrator. He should be seated in front of the Cancellarius who provides him with the middle pillar of air and the powers of the quintessence which he is expected to manifest into the the temple of Maat.

The question about all this is what has all this work got do with the post of “past-heirophant”?. In Whare Ra this job was basically to assist the Hierophant in bringing in all the energy into the temple and to effectively sit in his chair as Osiris when the Hierophant was running around being Aroueris. He is Aroueris when the Hierophant is sitting down. The question is, is this role really required as it breaks a lot of very important symbols on the top table. You lose the idea of the tree of life, you lose the trinity, because four officers do not mean the same thing as three.

The role, while an interesting idea, is not mirrored with other officers. Just because the Heirus stands up there is not a past Heirus to fills the passive role while the officer is active on the floor.

Since none of the chiefs roles are contained in the Cipher manuscripts it means that they are the invention of Mathers and Westcott. While the idea of three chiefs shows some alchemical genius, the use of four does not. In fact it shows the influence of freemasonry. In freemasonry once someone has passed through the chair they are given a past master title. They are supposed to assist the current master in their role. Sound familiar? However it is just another officer and a sop to the lost status which is afforded to the new master of the lodge.

Magically it does little which is not done elsewhere and actually messes with the tree of life and alchemical symbolism which is much more important. When I started to question the role of the past Hierophant I noticed that with the officer sitting on his desk there are actually 11 officers. Praemonstrator, Cancellarius, Imperator, Hierophant, Past Hierophant, Hegemon, Hierus, Dadouchos, Stolistes, Kerux and Sentinel. While this is a little superstitious, it is not a desirable number of officers to have, since it represents the qlippoth, whereas ten indicates the sephiroth.

Given this, I think it is probably better that the past Hierophant is handed his P45 and pink slip and told that in a magical order we don’t really need to create senior jobs to avoid upsetting people who can’t be Hierophant any more.