Skip to content
The modern Golden Dawn has a bit of a problem with using the reversed pentagram due to some very mixed messages about its use by its founder Samuel Mathers.
Mathers firstly tells students that it is an evil symbol and you should not use it, however later on he tells you that it has a use for controlling evil spirits. It is possible that Mathers changed his mind, but it is equally possible that he expected people to work out what the reversed pentagram actually meant.
In Mather’s Last Secret I printed the only version seen of the original GD portal ritual. In it Mathers describes the Devil card which shows the Devil with an upright pentagram above his head and a face which is shaped like an inverted one.

“Thus he represents the gross and materialized Elemental Forces of Nature, and the whole would be an evil symbol, were it not for the pentagram of light above his head which guides and regulates his movements. He is the eternal renewer of all the changing forces of creation in conformity with the laws of the All Powerful One, Blessed be He, which controlling laws are typified by the Pentagram of Light surmounting the whole.”

In other words, the reversed pentagram represents lowest elemental force, but it is redeemed by the message of the upright pentagram. 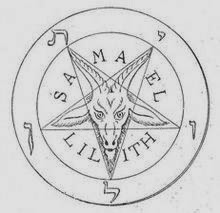 The upright pentagram means that spirit rules the elemental nature, however the reversed pentagram appears to show that spirit is under the control of the elements. However, in fact the pentagram means a little more than that. It actually shows that spirit is latent within all matter. Moreover, if you use a reversed pentagram to banish or invoke you end up revealing that latent spiritual force.
The reversed pentagram is about finding the divine in everything around you. This is a mystery and a heresy to those who find matter evil and something which needs to be escaped. This might be the reason why it does not get a mention or developed in much of the GD paperwork.
The formula of the Devil card hints that it is possible to do a supreme inverted pentagram ritual which is intended to liberate and use the divine force which is around you.  If you look at the card it would suggest you would do a normal upright active or passive pentagram and then an inverted pentagram of the element.  You are, using Mathers’ words working with the “eternal renewer of all the changing forces of creation in conformity with the laws of the All Powerful One.”
A lesser ritual of the pentagram ritual has nothing to do with the elements and Mathers suggests that were you to draw an inverted pentagram you would be drawing symbol of the “gross and materialised Elemental Forces of Nature.”What I think he is suggesting is that spirit is latent in everything but slumbers. You cannot draw it out naturally but need the extra energy of a spirit pentagram to awaken it.
Mathers suggests using this reversed pentagram when you are dealing with evil spirits so that you do not harm them. This too is probably a blind. When you open the quarters using any supreme pentagrams you are working with the elementals through the power of spirit. Inverted pentagrams take you much lower into matter. This is a point often represented by the depths of the underworld. It is hard for us to get to that point naturally because it is bound up with our own rational fears. We are trying to conceive of a point where matter slows down to the point where it triggers unconscious fears of demonic forces, death, plague and extinction.
The reversed pentagram acts as a diver’s weight drawing us down, but before we can do so we need to be sure that we can handle that pressure.
It takes a balanced soul not to journey to that level and not project their own devils into the dark, but rather see the divine manifesting there.  It takes an adept to see those forces as Gods working slowly at those levels.
It is probably for this reason that Mathers warned his students off, while at the same time gave hints of what they needed to do.
Share on Facebook Share
Share on TwitterTweet
Share on Pinterest Share
Share on LinkedIn Share
Share on Digg Share